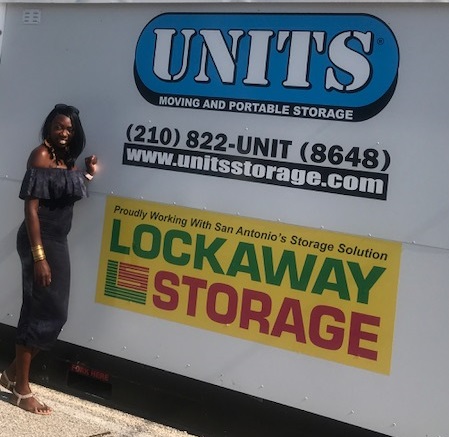 UNITS Moving and Portable Storage has a new manager in San Antonio. Renee Rios, who previously was working in apartment management for Strat Prop, made the transition to storage on June 11th, and after a whirlwind of learning fast on her feet, Renee is settling in to her new role.

UNITS Moving and Portable Storage has a new manager in San Antonio. Renee Rios, who previously was working in apartment management for Strat Prop, made the transition to storage on June 11th, and after a whirlwind of learning fast on her feet, Renee is settling in to her new role.

Peter: What has the transition been like going from doing apartments to do storage?

Renee: Actually it’s been great. It’s a lot of interaction over the phone. I’m able to make the clients laugh like I’ve known them forever. I get to go out and market, do fliers, try to get new customers. I really like it. We have the best deal on storage around! It’s a lot to learn but it’s been good.

Peter: Did you interact with Adam Martin much while you were learning?

Renee: I learned from him over the phone. Also Kathy helped. I was just thrown into it but I’m a fast learner. Sales is my thing so I had no problem with that. Learning the program took some time but I got a lot of information from California, South Carolina and San Antonio. I haven’t met Adam in person yet.

Peter: How long were you managing apartments before making the change?

Renee: It hadn’t even been a year yet.

Peter: Oh wow so you were hired to do one thing, then in less than a year, made the change to a totally different job? What a roller coaster year one!

Renee: Yes, it definitely has been!

Peter: What’s the biggest difference between UNITS versus the apartments?

Renee: There’s a little more phone time, but not much. I don’t interact with the customers face to face as much, but I will go out to the location and see how things are going and try to meet as many of them as I can.

Peter: Did you have to move when you changed jobs?

Renee: No, not for the job change. I moved from San Antonio when I was originally hired by Strat Prop with my daughter, who just got back from South Korea. I looked up jobs online wanting to try something new, and that’s how I found the apartments job. I’d never done anything like this before but I wanted a new challenge.

Peter: You said you have a lot of experience in sales?

Peter: How is the transition from sales to storage management? Is it what you expected?

Peter: Thanks Renee! We’re really happy to have you on board the UNITS team!

We’re looking forward to watching Renee grow into this position. She’s had to learn two completely new industries in less than a year’s time, but from what we can tell so far, she’s more than up for the challenge!

GET AN INSTANT QUOTE